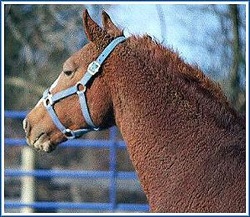 The micro curled or brillo pad curly horse is a very curly horse, that usually remains noticeably curly all year around, (even its summer coat.) Its coat feels different from other Curly Horses. It feels very stiff and springy, like a brillo-pad or wiry to the touch. Jackie Richardson says of her mare, *Sugar, her wiry type hair, is especially noticeable on her face. Once you see her, and touch her, you never forget her.

Jackie's stallion *Kreskin,pictured above, is a micro curl, brillo pad curly stallion and is also proving to be a homozygous curl producer.

So far, we have found micro or brillo pad curl horses to be rare, and appearing only in the Missouri Fox Trotter Curly bloodlines of Curly Jim. It appears that micro curled horses shed out enough of their manes and tails, that they keep them short, but not as much as the most extreme trait Curlies. The micro curl horses, have reasonably thick haired manes and tails. We feel they are different enough from other Curly Horses that they warranted a separate description.

We would like to reiterate, there are no right or wrong terms for all the different types of curly horses, nor are there any official industry names. For example a yearling or weanling extreme trait curly horse would certainly be guilty of having tight curls too. Actually we are not trying to separate or distinguish different types of Curly Horses, as much as we are trying to just discuss some fairly obvious differences, that may or may not prove later, to have any significance. These pages are for exploration, comparison & discussion. Hopefully they can serve as an additional reference and resource for curly owners, as well as our many researchers out there, who are often asking us, "what the heck are you talking about?" when doing research & comparisons on these unique North American Curly Horses.