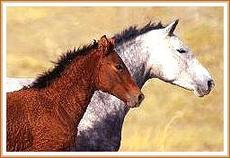 Curly Horse descriptive terminology is still in evolution and therefore is still subject to change. It is definitely not "set". For the sake of our discussions on this site, we will attempt to define these genetic and descriptive terms used in the Curly Horse industry. Some of these are standard in the General Horse Industry and some are specific to North American Curly Horses. Until we have enough research data and education to facilitate a common consensus, this evolution is likely to continue.

For the sake of simplicity, we will use the genetic terms as if the North American Curly Horse has been proven to have one pair of genes that determine the curly coat, which is possible, but certainly not yet proven.

By or Sired by.
Always refers to the sire of a foal.

Dominant gene.
Not to be confused with the term homozygous, dominant refers to the type of curly gene a Curly Horse may have. Most North American Curly Horses are of the dominant Curly gene type. A dominant curly gene, when passed on in combination with the normal straight haired gene, will dominate it, and produce a curly haired foal as its result.

Dun factor.
The dun factor is inherited with the dun dilution gene. Dun factor refers to striping patterns, with a darkened color dorsal stripe down a horse's back over the vertebrae, and zebra striping of the lower legs. In some heavier expressions of the dun factor the horse may have netting or cobwebbing, of its legs and/or face. The ears will be edged in the same dark color, and often the top half of the ear will be that color and sometimes the muzzle and up the bridge of the nose. The dun factor is often displayed more obviously in foals than in adult horses. If only a dorsal stripe is present with no other dun factoring, that dorsal stripe may actually be "counter shading" and not indicative of the dun dilution gene. The dun factor is considered a primitive coloration and is seen most often in breeds of primitive type or those descended from them.

Extreme.
An extreme trait curly horse. Not the best term, but commonly used. This indicates the presence of a very curly coat and little or no mane and tail hairs. It seems the little that these horses do grow in Winter, they shed out nearly completely come spring.

F generation.
The F generation tracking system, is another genetic tool, that is commonly used by experienced breeders to preserve and re-establish endangered bloodlines, or types, by continuing to condense pedigrees, reduce variability, and thus continue to develop an evolving breed or restore a nearly extinct one.
The F Generations, are from F1 to F4, defining the progress made by levels achieved on a course of breeding toward a goal or standard, in breed establishment. The letter F designates the filial crosses, from a first parent generation, on up to an eventual 4th generation, in a program that is breeding to condense the present genetic material, stabilize it, and preserve genetic material into a predictable breed with a minimum level of genetic variation. This is the method used by breeders involved in true breed genesis.
In defining the F chart breeding system, we have to use some fancy genetic terminology. But the fact is, it doesn't take knowledge of fancy genetic terminology to be an experienced breeder that has gained the experience and the knowledge of how to keep the Curly Horse on the road to breed genesis. The practice of breed genesis, no matter what you call it, is very familiar to many successful breeders of the North American Curly Horse, both past and present. The understanding of condensing genetic material of the Curly Horse through generations of selection, has been in practice all along, in many successful breeding programs. Many Curly Horse breeders are dedicated to "Curly to Curly" breeding. Many Curly Horse breeders are very dedicated to bloodline preservation. Many breeders are dedicated to the concept of certain type development. All of these are examples of breeders using a basic F generation approach to breed development. The fact is, we can be proud of our many North American Curly Horse breeders, who are already producing some F2 and F3 level Curly Horses now, due to their uncompromising dedication & stringent selection, which is what it takes to keep the North American Curly Horse on the road to true, recognizable breed status, by anyone's definition.
Please note, the above F Generation chart plan pictured above, is still under review, by ICHO Research Council, ICAMS, and by the ICHO advisory panel's geneticists. It will likely pass that the SC (Smooth Coated) Curly Horse is also awarded certain F levels as a necessary Curly bloodline counterpart.

Genotype.
The genotype is the genetic term that is referring to the genetic information within its genes: the DNA of an animal. The genetic material that is present in an animal's DNA, may or may not be evident in the animal, physically.

Heterozygous.
This is the genetic property of a horse being able to pass on a specific trait in more than one form to its foals. Theoretically, when a dominant gene Curly Horse is heterozygous, it carries both a curly gene, and a straight haired gene. Under this scenario, it can pass either gene, so each foal it produces from a straight haired mare, would have a 50:50 chance of being curly, or straight haired.

Homozygous.
This is the genetic property of a horse being able to pass on a specific trait in only ONE form to its foal. In terms of Curly Horses, if a stallion produces all curly coated foals, no matter how many straight haired mares he is bred to, he is considered to be Homozygous for the Curly Haired trait.

Lp gene.
This stands for the leopard complex color gene(s); or the SPOTTED GENE, which is expressed in several saddle breeds of horses around the world. In the USA these include the Appaloosa, Colorado Ranger Horse & Tigre Horse, and in Europe, the Knabstrup, Noriker, British Spotted Horse, etc.

Modifier gene.
This is a gene or genes that possibly exist(s), that when present in a parent, and passed on to its foal, perhaps in homozygous form (one passed from each parent resulting in 2), or, perhaps in heterozygous form, (only 1 needed from one parent to have an effect), will cause the horse to exhibit incomplete expression of the Curly Coat. This is one plausible explanation for the resulting rare "minimally expressed" Curly Horses. Research on this possibility, may help us to understand the existence and significance of the Smooth or Straight Coated Curly horses, as well.

Out of.
Always refers to the dam of a foal.

Phenotype.
The phenotype is a fancy genetic term that is referring to the physically apparent traits, the visually obvious physical expression of an animal's genetic makeup. Examples of phenotype expression are such things as, color, curliness, markings, height, etc.

"STB"
Acronym for "Said To Be." Used in pedigrees; explained further on ICHO fees page.

"SC" smooth coat Curly Horse.
This is the glaring oxymoron designation, referring to the smooth coated (straight haired) curly bloodline foal resulting from 2 curly coated parents. We do NOT know how much, of the Curly Horse gene(s) the SC Curly Horse may carry. But in many cases, smooth coated curlies have been reported to be just as "curly" in all other traits, other than, their lack of curls. There have been numerous reports of hypoallergenic SC horses. There has been one report of a curly foal, produced by an SC colt (unplanned) crossed with a grade (non-curly) mare. Perhaps SC's are an integral, and necessary part, of the whole Curly Horse phenomenon. Or, perhaps some SC's carry Curly Horse genetic material, and some do not. Maybe we can come up with a DNA test that can indicate this, in time. In a tail-less breed of cat, called the Manx, long tailed Manx cats are just as necessary to the genetic viability of the breed, as the tail-less ones are. Perhaps we may one day learn whether this is also true of the curly coated and smooth coated North American Curly Horses, as well. Research may help us discover what part (if any) the occasional smooth coated curlies should play, in the genetic puzzle of this evolving breed of horse.

"SCx" smooth coated cross.
This is not official, but for now is serving to distinguish between an SC horse produced by 2 curly coated parents, which often carries other Curly Horse traits, from a smooth coated horse produced by a curly coated horse crossed with a straight breed horse, on the theory, or concern, that the SCx horse may often carry less or none of the other curly horse traits with it, such as being soft haired, hypoallergenic, very peaceful natured, etc. With more research in the future, perhaps we will learn more, and have to guess less.

xx* pedigree.
This counts stars in a pedigree, which indicate a curly coat. 4 generations = 15 possible stars which includes itself. For example: 15* pedigree.


The International Encyclopedia of Horse Breeds by Bonnie Hendricks was used as reference for this page.

DISCLAIMER: With the North American Curly Horse, a disclaimer is always a good idea. It seems, as soon as you think you might have something figured out that is predictable in these horses, the next Curly Horse that comes along, will prove you wrong. We realize and understand this, and want you to realize, we are not claiming very much as fact yet. Any and all of these glossary of terms and explanations we have set forth above, are subject to much more research, review and further understanding in the future, in regards to how they will ultimately relate to the development of the North American Curly Horse.

We are excited to continue the discovery and study of these unique horses. Everything that we present to you in our findings and research, will always be as current as possible, and everything we believe might or could be true, or not, we will pass on to you, in just that form. Conjecture is nice, but we all must admit, appearances can be deceiving. We are searching for the truth, with un-biased research and methodology. We are not certain, yet, about so very much in regards to this rare and mysterious horse. But we are really enjoying the discovery process! We hope you will join us in this exciting journey of discovery, education, and achievement!