Through genetic testing we now know most all extremes are the result of a horse carrying 2 Curly Coat KRT25 genes, they are homozygous for KRT25 +/+. While other Curly Horses will shed some mane and tail hair in varying degrees, heterozygous for KRT25 +/-, these extreme trait Curly Horses shed out a lot - some nearly all - of their manes and tails. The KRT25 Curly coat gene is found in these lines: Damele, Native/Warrior, Fredell, Canadian, Wy Salt Wells Mustangs and many Nevada mustangs.

As they mature, many extreme Curlies lose the intensely curly body coats and their coats become frazzled or furry looking, like an over-processed perm. During summer, but more surprisingly, even during winter, their body coat is no longer as obviously curly as typical Curly Horses. The hair inside their ears however, remains tightly curled year around, and their eyelashes usually curl almost into a circle.

There are some extreme Curly Horses who do retain their very curly body coat throughout life, which, like all Curly Horses, is most evident in the winter. *Mei-Mei, pictured, shows the very curly winter coat looked for in any Curly Horse, as well as her strong boned constitution. She also exhibits the extreme Curly's extra-sweet, reliable temperament. Also being hypoallergenic, extreme Curlies with their unusually mild and reliable temperament make them the most successful children & therapy horses available.

Many Curly Horses, especially extreme Curlies, seem to go through a temporary unattractive growth stage as yearlings & two-year-olds. But they do grow out of these homely stages, and like any well bred Curly, continue to develop into excellent quality hypoallergenic horses with extra kind dispositions. Many Curly Horse breeders consider an extreme trait Curly Horse to be very valuable, and unlikely to produce smooth coat foals. So far, statistics indicate they are likely to be homozygous for KRT25 gene. However, not every homozygous Curly Horse is an extreme curly.

In blood studies done by ICHO Director of Research, Andrea Schaap, DVM, it was found that the thyroid levels of the extreme trait Curly Horses tested, were well within the normal range. Their fertility is also normal. This would discount any concern that these horses might shed mane & tail hair due to low thyroid levels.

Curly Horses of Curly Jim bloodlines, when homozygous for SP6 +/+ dominant gene curl, are not extreme trait curlies, and have typical manes & tails. The gaited Curly, Walker's Prince T bloodlines are descended from Curly Jim an unregistered Curly horse that foxtrotted, he passed on the dominant SP6 gene.

SOME extreme Curly Horses occasionally shed some areas of their body coats in spring & summer to the point of having some patchy baldness for a while. These Curly Horses are referred to as "Baldies." They are quite rare. On this website, "Baldies" are not what we are referring to, when we talk about extreme trait Curly Horses. What causes "Baldies" (and their connection to the dominant curly hair gene) is still undetermined. 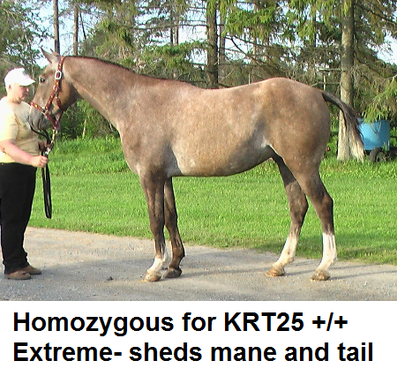